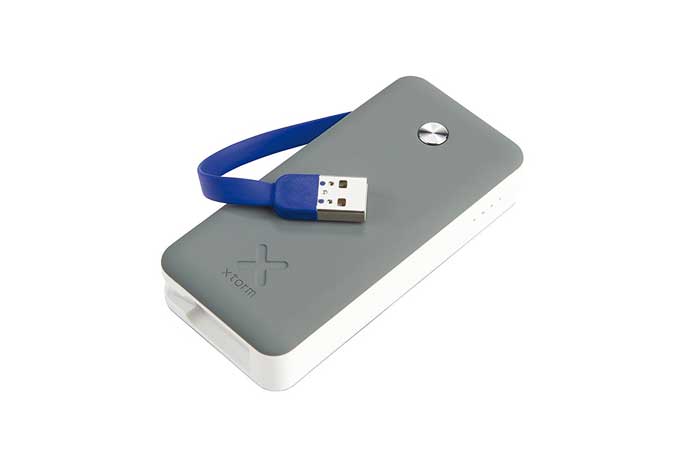 A great power bank for those who are looking for a stylish power bank with quick chargeability. While not the strongest power bank in terms of power capacity, it charges one or 2 smartphone devices quicker than most thanks to it's higher output, it is however definitely not the best choice to charge tablets.

Power capacity: 6000 mAh
Outputs: 2 (2.5 A total)
Weight: 130g (4.6oz)
Time to charge itself: 3 – 4 hours
Compatible with: iPhone, Android and other smartphones, digital camera, smartwatch or any other micro-USB supported device (tablets not recommended though)

Xtorm, while not the most popular brand in the US, it’s devices are doing quite well in Europe and are known for their conveniency. In this review we’ll be taking a look at the Xtorm Power Bank Air 6000.

The Xtorm Air 6000 is a compact power bank and while you wouldn’t usually take design much into consideration when looking for the best power bank, the designers at Xtorm really know how to catch the eye with the Air 6000.

Compactness is an important attribute to a power bank, since you’ll usually carry it in your pocket or bag. The Air 6000 is smaller than a smartphone and easily fits in both your front or back pocket. It measures 3.8 inches in length and 1.9 inches in width. However, it is rather thick at 1 inch but still thinner than enough to fit in your pocket. The power bank has a grey layer of soft rubber, which gives it a nice quality feel and a good grip which isn’t unimportant. The color combination of blue and grey isn’t for everyone, but it stands out among other power banks and it’s a nice to see a stylish power bank instead of the usual dull and boring looks of other battery packs. The Xtorm Power Bank Air 6000 has 2 slots which you can use to charge multiple devices simultaneously. The output is dependant on how many devices you’re charging but we’ll get into this later.

As mentioned above the Power Bank has 2 USB outputs which means you can charge 2 devices at the same time. The output amperage of the power bank is 2.4 Ampere which means it charges your device rather quick. However, if you simultaneously charge 2 devices the amperage will be split into 1.2 Ampere each and both devices will charge slower than they normally would. Nonetheless, it’s still enough for most devices to charge at an ‘okayish’ tempo and the fully charged power bank has enough capacity to charge a smartphone battery twice until it needs to be charged itself.

The Power Bank has a high power output, but rather low capacity of 6000 mAh, which means it’s perfect for smartphones on the road, but not ideal for tablets and certainly not for laptops. If you’re looking for a Power Bank to charge bigger devices, this is not the best choice for you.

A big advantage of the Xtorm Power Bank Air 6000 is, that it charges itself rather quick. If the power bank runs out of steam it takes less than four hours to charge it up again fully.

The Xtorm Power bank Air 6000 is first and foremost, a smartphone power bank. It’s relatively low capacity of 6000 mAh makes it perfect for smartphones for up to 2 charges, which it does pretty fast, but it’s definitely not ideal for tablets and laptops. The foldable USB cable is a nice touch which we haven’t seen in other power banks yet, and the double USB outlet make it versatile enough to stand out above others in the same price category. The Xtorm Power Bank Air 6000 is a good compact choice for those who like a touch of style to go with their power bank.